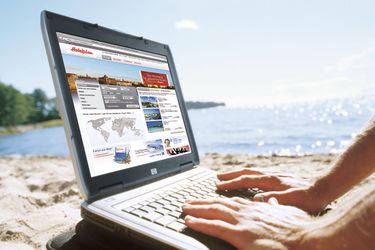 The Hotelplan Group generated turnover of CHF 1390.7 million for the 2010/2011 business year, a 6.6% decline on the prior-year period. Earnings before interest and taxes (EBIT) amounted to CHF -19.4 million, while Underlying EBIT stood at CHF -1.3 million. Total customer volume for the year amounted to approximately 1.308 million travellers, up 3.6% on the prior-year period. Despite the "Arab Spring" and the adverse impact of currency movements, Hotelplan Suisse recorded annual turnover of CHF 636.7 million, an EBIT of 6.3 million and an Underlying EBIT of CHF 12.6 million. For the current business year, the focus will be on further pursuing the already-launched extensive online and technology drive that will help enhance the results.

Political upheavals in North Africa that virtually halted the high-turnover business to Egypt and Tunisia, currency movements and natural disasters in Asia, all had a major influence on the 2010/2011 business year of Migros' Hotelplan Group, which ended on 31 October 2011. The annual turnover of CHF 1390.7 million was 6.6% lower than for the prior-year period. Earnings before interest and taxes (EBIT) were CHF 7.1 million down at CHF -19.4 million and the Underlying EBIT of CHF -1.3 million was a CHF 14.9 million year-on-year decline. Non-recurring items for the year included the cost of substantial restructuring activities, especially in Italy, and impairments to intangible assets in Russia. The Hotelplan Group also concluded its divestiture of the "Horizonte" hotel group with the sale of the "Riviera Beach Club".

Encouraging stability on the Swiss market

Despite the collapse of business to Egypt and Tunisia and the weakness of the euro, Hotelplan Suisse largely maintained both its turnover and its EBIT at prior-year levels: turnover was down 3.6% at CHF 636.7 million, while the CHF 6.3 million EBIT result was a 6.0% decline. Results for Hotelplan Suisse were buoyed by positive trends for the business travel brand bta first travel. Net of non-recurring items, Underlying EBIT for Hotelplan Suisse stood at CHF 12.6 million, a 10.0% decline. Current winter business has been modest to date, while booking levels for summer 2012 are encouragingly strong in traveller volume terms.

Interhome, Europe's leading vacation home rental agency, generated turnover of CHF 185.9 million for 2010/2011. The 10.1% decline on prior-year levels was due primarily to the steep fall of the euro against the Swiss franc. Thanks to an extensive cost reduction programme, EBIT for the year amounted to CHF 3.5 million, a 16.7% improvement on the prior-year period. The gradual acquisition of Inter Chalet, which was embarked on in November 2011, is making good progress, though the synergic benefits here will only be felt from 2014 onwards. Interhome has been seeing strong growth in booking volumes since the beginning of 2012, and is generally well on track.

Hotelplan Great Britain reports a favourable 2010/2011 business year: turnover was increased 21.3% to GBP 181.6 million, and EBIT was raised GBP 5.0 million to GBP 2.0 million. The positive performance can be ascribed in particular to the successful completion of both, the recent corporate restructuring and the integration of the Enigma Group. The results are especially impressive in that they were achieved in a fiercely competitive business environment which stemmed primarily from the lack of snow in the 2010/2011 winter season. Conversely, the sizeable snowfalls of the present winter period have generated encouragingly strong booking volumes. Specialist ski travel arrangements account for some 80% of Hotelplan Great Britain's total business volume.

Hotelplan in Italy achieved turnover of EUR 146.6 million (down 22.4%) and an EBIT of EUR -10.5 million (a EUR 9.4 million year-on-year decline). The disappointing results are attributable in particular to the performance of the Turisanda brand, two-thirds of whose business is to destinations in North Africa and the Middle East. The second key reason for the declines was the company's broad and expensive restructuring, which also entailed the elimination of more than 100 jobs. Underlying EBIT was still clearly negative, however, at EUR -6.7 million.

In Russia, Ascent Travel posted turnover of EUR 62.6 million (up 15.5%) and an EBIT of EUR -9.7 million (a EUR 5.3 million decline). Russia remains a difficult business market, and action has since been initiated by the Hotelplan Group to sell its majority stake in Ascent Travel.

Still a tough market environment and focus on new technologies

After a challenging previous year, bookings have been showing a tangible recovery since the beginning of 2012. The restructurings in Switzerland and Italy, that were concluded in autumn 2011, will also deliver substantial cost savings in the current year. "The crisis is not over, though, and customer confidence is not yet sufficiently restored for us to approach the future with anything more than cautious optimism," emphasises Hans Lerch, Vice Chairman & CEO Hotelplan Group. "We will also see in the next 18 months whether the traditional tour operators will be able to meet and master the new online world and the structural challenges it poses," Hans Lerch continues. It is in response to these that the Hotelplan Group has been making substantial investments in "Player & Hub" technology, which enables operators to flexibly bundle their products and supplement these with additional services, too. The new technology is already being used in Travelwindow's Austrian business travel.at, and will be further adopted at Hotelplan in Switzerland and Italy within the next months.